Now I want to refer to the port-priority issue so let’s take the following example:

After STP convergence ends SW3550 takes the role of the root bridge and SW3560 needs to select the root port toward SW3550, because the root-bridge, the path cost and the sending bridge ID are the same, the only parameter left is the sending port ID.

Now this is quite good as L2 redundancy between these two switches but if we would like to load-sharing between those two links? One VLAN per link?

We can select port-priority per port or per VLAN ranging from 0 to 240 where lower is better.
The result on SW3560:

SW3560 has blocked port gi0/24 for VLAN1 and port gi0/1 for VLAN2.
Trying to do the same on the SW3560 won’t do anything and wouldn’t change the topology, the port-priority configuration helps “other” switches to take decision based on this parameter, the port-priority wouldn’t have affect locally on the configured switch.

Now let’s add one more switch to the equation: 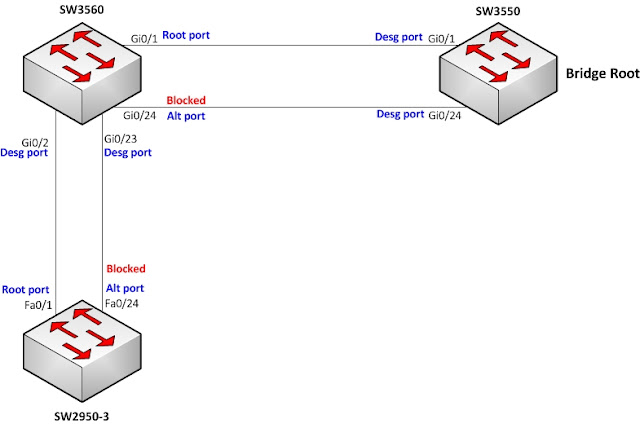 The same for this situation, after STP convergence, SW2950-3 blocked port fa0/24 for both VLAN’s.

After configuring the following on SW3560:

We can see that VLAN 2 has changed port Fa0/24 to forwarding and blocked port Fa0/1.