Here is a scenario:

A Customer, named ABC, has data center and few hundreds of branches. In the DC there are two routers which connected with 4 links to the SP network while in each branch there is one router with one or two links.

The gateway for the DC is the firewall which works with static router toward the HSRP VIP between the two routers.

Secure connectivity between all the sites

All links should be active for redundancy and link efficiency

Following these demands the most appropriate technology to use is DM-VPN.

In this post I will show how to configure dual DM-VPN with single hub which allows traffic load-sharing, both upstream and downstream, between the hubs and spokes while maintain redundancy in case of link/device failure.

This is the GNS3 topology that I used: 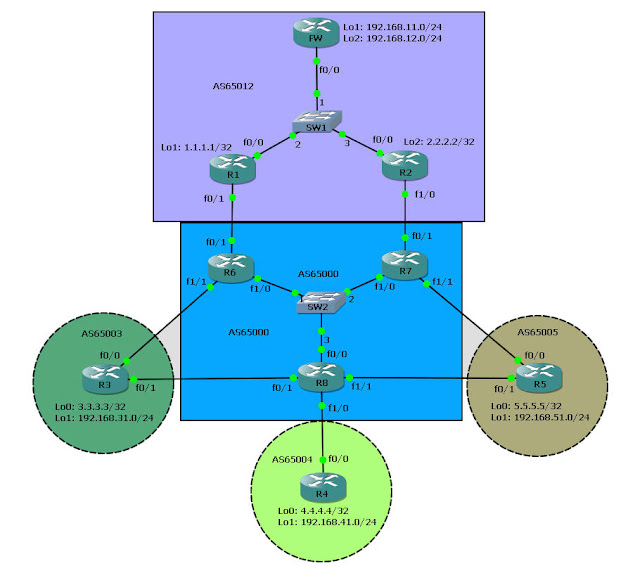 Let’s start with the SP network configuration which is quite simple -
All 3 routers use OSPF, MPLS and MP-BGP as PE routers, where R6 is the route-reflector for AS65000, all three routers also advertise default-information to their CE respectively.
R1, R2, R3, R4 and R5 are all CE routers connected to VRF ABC at the SP network.
For building up the DM-VPN network we will need only the loopback IP’s so the first task is to make sure that all customer routers are advertising only their loopback IP’s, and receive only each other loopback IP, through the SP network.

Now that the underlay network is ready and all customer routers learns each other loopback, we can start configure the overlay network - DM-VPN.

Each hub router will have single tunnel interface while spoke routers will have two tunnels, on for each hub.

First the encryption configuration (similar to all routers):

As I mentioned before this topology will be constructed from two DM-VPN networks with single hub.

Note that this is a DM-VPN phase 1 configuration which set the hub as the next-hop for the spokes without the ability for the spokes to communicate with each other directly.

Also note that under the tunnel interface protection profile for the spokes I used ‘shared’ option, because both tunnels use the same IPSec profile.

Now configure the dynamic routing protocol between the hubs and spokes, R1 and R2 will advertise summary-address for default route:

In the EIGRP process we configure the internal networks, the one that behind the router, and the tunnel interface to create an adjacency between the neighbors. On the hub routers I also configured redistribute static because the DC networks are not directly connected.
Spoke configuration (R4 output):

Now the DM-VPN is up and running, both all spokes connects to both hubs:

Each spoke can reach the DC from both tunnels in equal way (ECMP):

This will ensure that traffic from the spoke to the hub will share between the two tunnels on a per-destination method (CEF default load-share algorithm):

This can be changed to per-packet but it’s less recommended especially for voice traffic.
Now we need to make sure that the hub will see the spoke networks from two paths…
In the DC the FW is using static route which points to R1 and R2 HSRP VIP (10.1.12.254) where R1 is the active router for the HSRP group.

Due to the fact that I cannot change the FW to work with dynamic routing protocol, upstream traffic from the DC to spoke will have to go to hub 1 (which is the active HSRP) and from there to either tunnel 1 or to hub 2-tunnel 2, and from there to the spoke.

From the metric calculation we can see that we need to lower R2 metric by 2560 (or more) to make this path valid.

*We can lower the delay on R2 more than 100 but then we will have to use variance on R1 to use UCMP.

Remember that the setting is configured in 10th of microseconds, hence 4990 means 49900 microseconds:

The final configuration files can be found here:
LAB_CONFIG