Here in this post i will explain how to filter capture based on byte level, as an example i will use EIGRP packets.

Filter capture based on byte offset -

Choose an EIGRP update packet and mark the opcode field (1):

When you mark the field on the packet detail pane, a field on the packet byte pane is also marked (2), now note that the byte 01 is found on a grey area which represent the EIGRP payload, this payload starts on byte 02, so to capture all EIGRP packets which in the second field there is a byte with value 01 we will use the following string:

PROTOCOL - the protocol we are filtering – it can be IP, EIGRP, OSPF, GRE whatever
START_FIELD - indicate the number of the field we are looking on that given protocol
NUMBER_OF_BYTES - number of bytes to count, in my example I used 1 so only one byte after the first byte.
OPERATOR - can be any given one – equal, not, large or less, equal, contain etc.

Here is another example which filters EIGRP packets with a value 002f on the 11th and 12th bytes field: 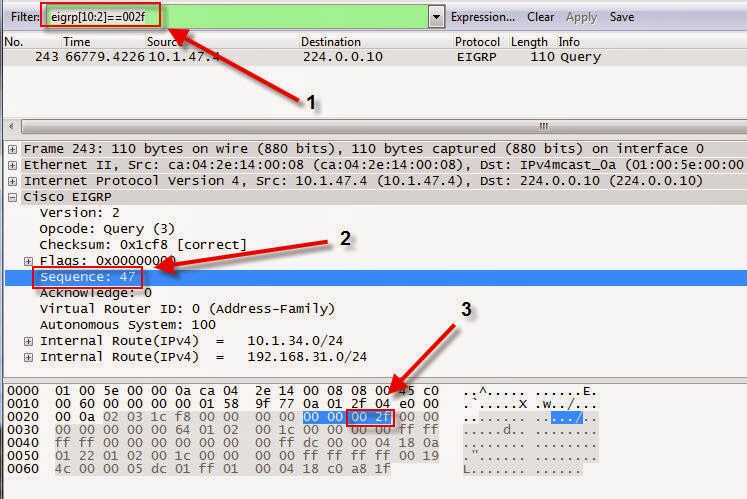 This method works on tcpdump and wireshark both on display and capture filters and can be used to capture any given packet with specific byte value.
Posted by Madari Tal at 6:35 PM