Using the following topology I will demonstrate how to configure SP network for MPLS-VPN and customer network for dual DM-VPN as I implemented for one of my customers.

This is the network topology: 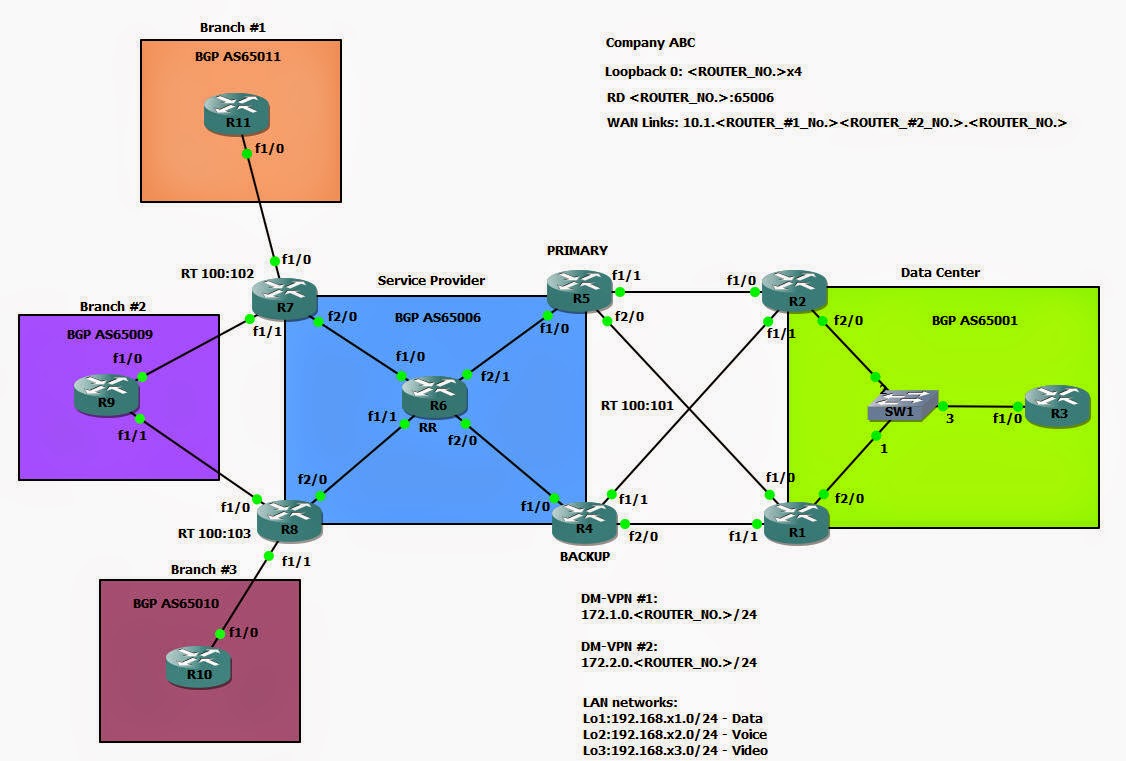 Each router is configured with interface loopback 0 as the router number, for example R6:

Every WAN link (link between 2 routers) is configured with the following syntax:
10.1.X.Y.Z/24
Where X is the first router number, Y is the second router number and Z is the router number.

And on all SP network facing interfaces, R4 for example:

Task 3: Configure IGP
OSPF is used as IGP in the SP network in order to advertise all routers loopback interface
R4:

And R6 which is P router is used as route-reflector:

I also used peer-group to save some keystrokes

And R6 which is again the route-reflector:

Note that each router has its own RD and site RT, in this example R4 is connected to AS 65001 – customer data center and the RT are 101. This can be helpful if we would like to share or block traffic between the sites.

BGP AFI for the VRF with the PE to CE routing protocol, in this case I used BGP, on each PE router.

Here is R4 as example:

In the case of R4 there are two interfaces facing CE routers, Fa1/1 and Fa2/0.
Once the SP network has configured we can move on to the customer network configuration…

Each router with its own IP address scheme

Each CE is peering with PE using eBGP

All CE routers advertise only their loopback 0 interface and will receive only all other CE’s loopback 0 addresses.

The BGP overlay network is used to advertise only the loopback interfaces of all CE routers, there is no need for default route or any more other routes.

On Data center and branch #2 site there are dual uplinks as for now for redundancy purposes in active/passive mode. Later on we could use them in active/active mode in order to double the bandwidth capacity.

I just used the BGP weight command in order to prefer routes from R5 else then R4.

In the following lab I’m using dual DM-VPN (single Hub) which means that each spoke router will have two tunnels to two different DM-VPN networks – one on R1 and the second on R2 which are the hub routers.

Note the tunnel key, NHRP network-id and authentication to keep things clear and prune to errors.

Two tunnels, one for each hub for redundancy purposes.


Also note that all DM-VPN tunnels must be configured with a proper MTU setting else we will encounter problems with traffic traversing the tunnels.

The calculation is as follow:
20 bytes for IP header
24 bytes for GRE header
20 bytes for TCP header
34 for IPSec header
All in total = 98 bytes

So the maximum TCP segment size should be 1402 bytes while the maximum MTU is 1422 bytes.

So we need to configure the following commands on both hub and spokes routers:

After the tunnels are up and running we can configure the IGP routing protocol for the customer network which in this case I used EIGRP.

Advertise all his internal networks and runs on the tunnels interfaces.

Runs on the tunnel interfaces and on his LAN segment (10.1.123.0/24)
R3 represent the LAN on the data center, which could be also customer firewall, runs EIGRP with default route advertisement to prevent black holes in the customer network:

Now let’s do some verifications and look on some outputs…

Note that R6, although he is just a transit router, sees all the MP-BGP routes

All tunnels are in up state

Note that R1 sees all customer internal networks through tunnel 1 and all loopbacks through R5 – the primary link.

Next post I will demonstrate, on the same lab, how we could do load-sharing for different networks through different paths and maximize bandwidth using active/active topology.
I also will post the full device configurations.