The tunnels are created dynamically, between the hub and spoke or spoke to spoke, without any specific configuration for each node. This allows great flexibility and scalability for this kind of solution without the complexity and overhead of full mesh GRE/IPSec tunnels.

This is the lab topology: 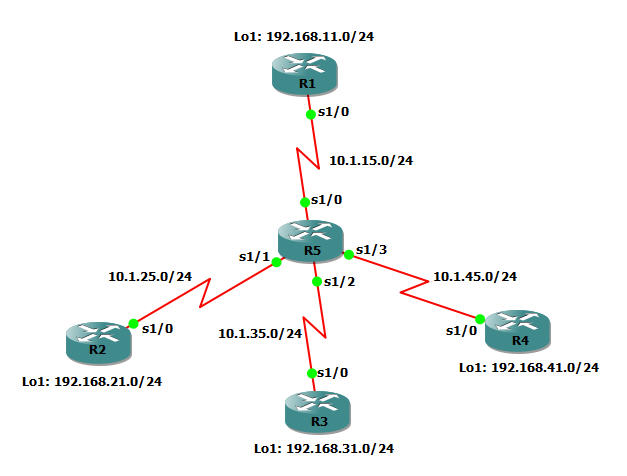 Each spoke and the hub are holding 192.168.xx.0/24 segment which represent the site local network.

So after configuring the IP addresses on the WAN (serial 1/0) and LAN (Loopback1) interfaces and setting a default route on each router toward R5 we can start configuring the DM-VPN.

Let’s start with the first step of configuring the tunnels on the participating routers, I will start with R1 which in our case act as a hub router:

The NHRP (Next-Hop Resolution Protocol) is the key factor for success which responsible for translate tunnel-to-physical interface address between the participating routers. Whenever a spoke is looking for route to specific network the NHRP protocol provide the answer.

NHRP multicast dynamic allow us, as the name apply, to use multicast dynamically over this tunnel. This will be required later when we will add the dynamic routing protocol which most of them using multicast to establish adjacencies.

The NHRP network-id is used to distinguish between DM-VPN networks (yes we can use more then 1 DM-VPN network on a single router for redundancy purposes) and it must be the same on all routers to participate in the same network.

Also note that the tunnel source is serial1/0 but there is no tunnel destination, the tunnel mode is GRE but in multipoint way.

First the IP address of the tunnel is part of the DM-VPN network segment.

Then the NHRP commands: In the spoke configuration we do need to specific the hub location – NHRP map is correlating between the WAN IP and the tunnel IP for the hub router, also the multicast mapping which points toward the WAN interface and the NHS (Next-Hop Server) IP address.

In a DM-VPN network which based on NBMA, the hub doesn’t know about the spokes but the spokes are configured to register at the hub and after successful registration they learn about each other through the hub. That’s the reason for the differences between the hub and the spoke configuration.

After finishing the first step we can verify the DM-VPN configuration by issuing the following command:

The second step is to setup a dynamic routing protocol on the network, in this case I will use EIGRP.

I have configured EIGRP AS1 process and configured both LAN and tunnel interface in the topology, also configured no next-hop-self and no split-horizon to prevent connectivity issues because R1 is hub router which learns and advertise network on the same interface.

Pretty simple and the result:

Now before we proceed to the third step let’s look how does traffic traverse between spoke to spoke and how does the spoke routers register with the hub.

So R2 is looking into the routing table: 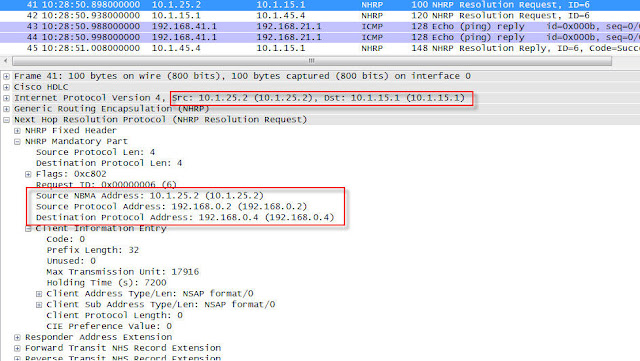 Note the request is for the tunnel IP address.

R1 is sending this request to R4: 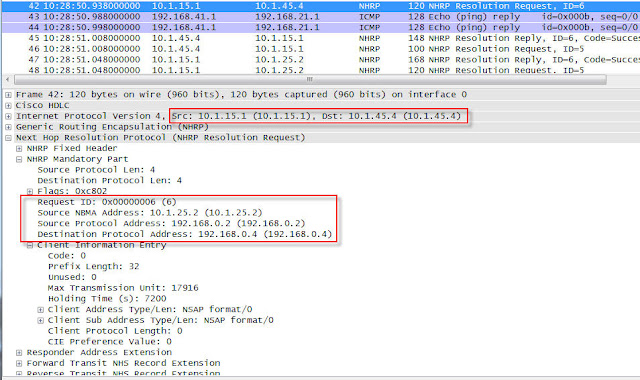 R4 is sending replay to R1: 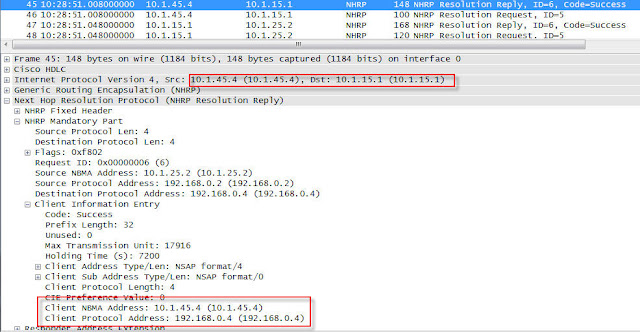 In the replay R4 includes the NBMA WAN IP address.

R1 is sending the replay to R2:

Another issue to look in is the NHRP registration message, following our tunnel configuration I configured the spokes to send a message every 20 seconds.

Here is a registration message to the NHS: 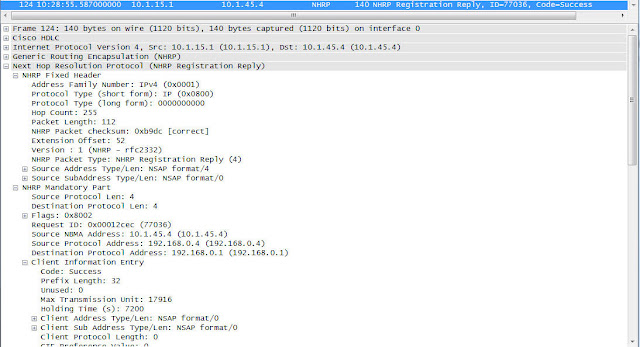 which in turn will send registration replay: 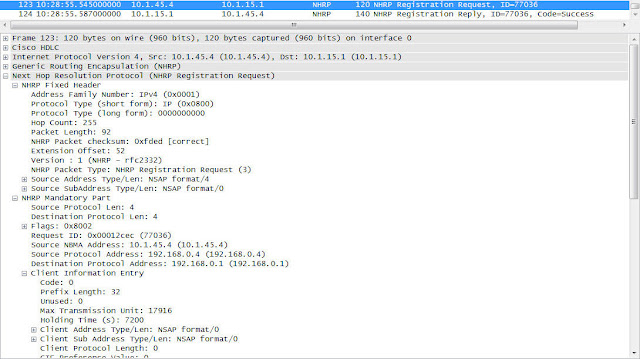 If the NHS doesn’t receive and NHRP registration from a spoke router after 20 seconds he waits 3 retransmissions, which occur in 7 seconds, until he declares a down spoke which in this case will not receive NHRP resolution requests anymore.

Using show ip nhrp brief we can see all dynamic and static tunnels:

And show ip nhrp details we can see some more information:

Show ip nhrp nhs detail we see the configured NHS and the number of NHRP request and replay messages: