First I would like to make a quick review on BGP Best path selection process:


BGP assigns the first valid path as the current best path. BGP then compares the best path with the next path in the list, until BGP reaches the end of the list of valid paths. This list provides the rules that are used to determine the best path: 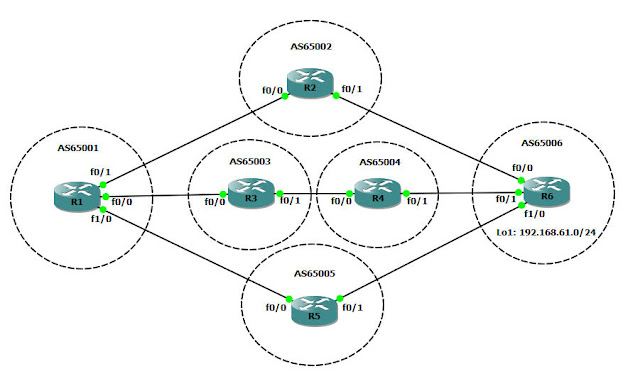 So who R1 is choose the best path?


R1 is comparing R5 path to R3 path and using the BGP bets path process list he choose the winner – in this case R5 due to rule no. 4.


Then compare R5 path to R2 path – both have the same path characteristic and R2 is chosen as the winner following rule no. 13.


If I will shut down R2 the path from R5 will be the preferred one:

But if I bring back R2, it won’t change that, and R5 will continue to be the bets path:

The reason will be rule no. 10 – the oldest learned path.


Now let’s configure some metrics and these routers, showing R2 as an example:

R3 and R5 are configured with the same beside the metric which is 300 and 500 respectively.


After clearing the BGP peers from R1:


R2 is still the best path although his metric is the highest among the peers, the reason is that R1 isn’t comparing MED from peers from different AS’s (following rule no. 6). This comparison will occur only if the first (the neighboring) AS is the same in the two paths.


So now let’s configure R1 to compare the MED although it comes from different AS’s:


Clear the BGP neighbor list and look again on the BGP table:


In MED lower is better but we can see that R5 has chosen as the best path although R3 has much lower metric, the reason is rule no. 4 – AS_PATH, which comes before the rule no. 6 -MED, and we can see that R3 as-path is much longer.


We can configure R1 to ignore the AS_PATH attribute using a hidden command:


This command is hidden since IOS 12.4 but it’s still valid and we can use it.


We can see that R5 is the best path as paths received with no MED are assigned a MED of 0 which is lower.

This command will cause R1 to treat paths with no MED as worst and give them the worst MED value available: