My goal in the following lab is to test the options and features while redistributing routing protocols.
Here is  the current topology: 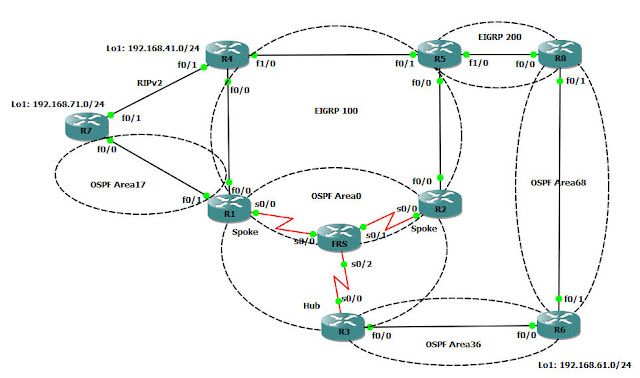 1.       Virtual-link between area 0 and area 68, we need to configure the virtual link over area 36 because it is the transit between 68 and 0, also note that the virtual link is done using the router-id and not the IP.

Then we will using this route-map to redistribute RIP into OSPF:

And we got the following error message:

The reason is that Area 17 is a stub area hence he can’t advertise LSA type 5 (external routes), so let’s convert area 17 into an NSSA area which eventually allow us LSA type 1,2 and convert type 5 into type 7:

Note that the network 192.168.41.0/24 is marked with N2 which means it has learned via NSSA area external type 2.
External type 2 means a route with a calculated metric, to this network, from the advertised router perspective - R7, which is the ASBR in this case. This type along with metric 20 are defaults for OSPF and we can change them while issue the command redistribute under OSPF process.

Configure prefix-list and route-map so we could control what we are advertising:

And redistribute OSPF into RIP:

Note that RIP doesn’t have default metric, which calculated based on hop counts, so if we wouldn’t specific the metric the network will be down.

While trying to redistribute 192.168.61.0/24 into RIP I have encounter a very common error,
In this lab I’m using loopback interfaces to simulate LAN segments, OSPF doesn’t advertise loopback with their correct prefix hence prefix-list PL_NET61 wouldn’t be able to catch this specific network and nothing will be advertised:

In order to fix that we need to configure under any loopback the following command:

This will allow OSPF to advertise the network with the correct prefix.

To verify the result:

Again always control what you are advertising.

Very similar to RIP, EIGRP must be redistributed with metric.

So now after advertising network 192.168.61.0/24 all over the network let’s examine who learned what and from where.

R1 and R2 learn this network through OSPF from R3:

R2 is also redistributing this network to EIGRP.

R5 is learning this network through EIGRP from R2:

R4 is learning this network from two sources: EIGRP through R5 and RIP through R7, but in the routing table the preferred route is through R7 as it got a better AD (RIP AD120, EIGRP External AD170):

And last R7 which learn this network through OSPF from R1:

Using the distance command I can raise up the AD value of specific routes received from R7, in this case network 192.168.61.0/24 which will received from R7 will be with an AD of 180 which be higher then EIGRP external (AD 170).